What is glass made of?

Glass is the medium through which we see much of our world. Whether it be the protective covering over the liquid crystal screen that you’re reading this article on, the windshield of your car, or the stemware which both holds and displays your glass of red wine – glass is all around us.

While glass is brittle and can be broken, if protected it has the ability to stand up to the test of time. Humans have been making and using glass since about 3600 BCE and we know that because we’ve recovered artifacts that were at least this old!

But, for all of its ubiquity, most people don’t know what glass is made of. Some may be able to recall it has something to do with sand – but is that all there is to it? This article will break down the constituents of glass and explain how these components become a part of our daily lives. 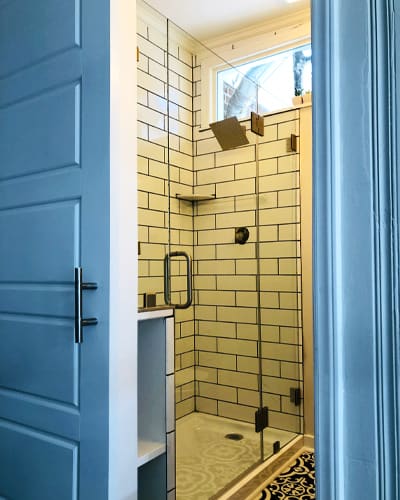 In its simplest form, glass is simply melted silica sand which was rapidly cooled. Glass can occur naturally, most commonly in the form of the volcanic glass: obsidian. Humans have been working with glass for over 5,000 years and over that time glassmakers have created myriad different types of glass, each with its own specific properties and ideal uses.

What is glass made of?

Glass consists of a base material, or former, and additives which serve to modify the physical properties of the finished product. Over the millenia that humans have been working with glass, literally thousands of different recipes have been developed.

Formers, sometimes called network formers, make up the majority of glass by weight. Silicon, boron, germanium, and phosphorus are the most common formers used in glass, with silicon and boron being the ingredients found in glass most people are familiar with.

Generally, commercial glass is mostly silicon with other formers being added to achieve a desired effect. Borosilicate glass, a type of glass commonly found in cookware like Pyrex, is only 12-15% boron and ~80% silicon.

Silicon dioxide has an incredibly high melting point of over 1,700C (3000F), making high silicon glasses more expensive and challenging to produce. Fluxes reduce the melting point of glass – and generally result in some changes to the physical properties of the finished product.

Two of the most common fluxes are soda ash (sodium carbonate or Na2CO3) and potash (potassium carbonate or K2CO3). Soda glass has a melting point of 1200C – which makes the manufacturing process easier as it doesn’t require the extremely high temperatures of high silicon glass. One significant downside of adding soda to glass is that, if used on its own, it makes the glass water soluble.

Some additives, like lead oxide, don’t lower the molten glass’s melting point, but make it less viscous and thus easier to work with. As a result, glassmakers are able to use lead crystal glass for enameling and glass blowers use it to create visually flawless products free from air bubbles.

By volume, stabilizers make up only a small part of glass – generally less than 10% – but they play an important role in determining the physical properties of glass. The most common stabilizer used in glass manufacturing is lime (calcium oxide). Lime is produced by decomposing limestone (calcium carbonate or CaCO3) at high temperatures.

Once the limestone has been rendered into lime, it can be used in tandem with soda ash, preventing the water solubility that the soda causes when used by itself. The resulting product is called soda-lime glass and is the most common glass product in the world.

Is glass a liquid or a solid?

As anyone who has ever poured milk into a glass cup knows, glass is perfectly capable of containing liquids! Yet, despite its apparent solidity there is a pervasive myth that glass is in fact an extremely slow flowing liquid.

This argument is sometimes grounded in its non-crystalline structure or is made by empirical claims of cathedral stained glass being thicker at the bottom edge where the glass has flowed downward over the centuries. However, despite glass’ unique physical composition and the thicker edges of ancient cathedral windows, glass is most definitely a solid at anything below its melting point.

Molten glass aside, let’s break down both of these counter arguments and get a better understanding of what makes glass a solid.

Most solids are solid because they have a crystalline atomic structure – the atoms are arrayed into neat, and essentially rigid, shapes. Silicon dioxide, more commonly simply called silica, is a crystal formed from 1 silicon atom and 2 oxygen (SiO2) and forms 3-dimensional tetrahedral crystals. 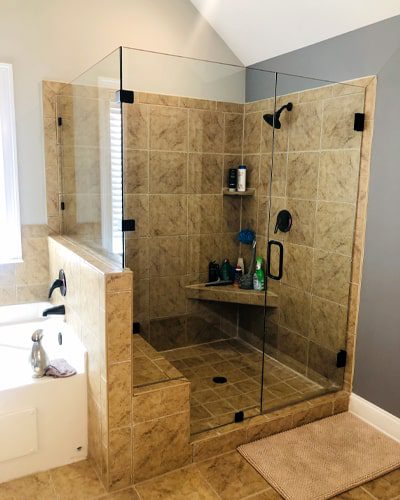 Most solids are solid because they have a crystalline atomic structure – the atoms are arrayed into neat, and essentially rigid, shapes. Silicon dioxide, more commonly simply called silica, is a crystal formed from 1 silicon atom and 2 oxygen (SiO2) and forms 3-dimensional tetrahedral crystals.

Silica glass is made from SiO2 as well – but instead of having its constituent atoms aligned into a neat crystalline structure, the atoms in glass have no repeating structure. In physics, solids like glass are referred to as amorphous solids – but note that they are only amorphous in terms of their lack of a crystalline structure and otherwise exhibit all properties associated with solids.

However, other people ground their argument not in physics or chemistry but in observation. They claim that since stained glass windows in medieval cathedrals are thicker at the bottom, it is obvious that glass flows.

This argument is compelling because some of the panes are thicker at the bottom. But this argument falls short because if you look carefully you’ll find that some are thicker at the top! These ancient windows were made using early and still unrefined methods that often resulted in uneven thickness – with the edges being left thicker than the centers. 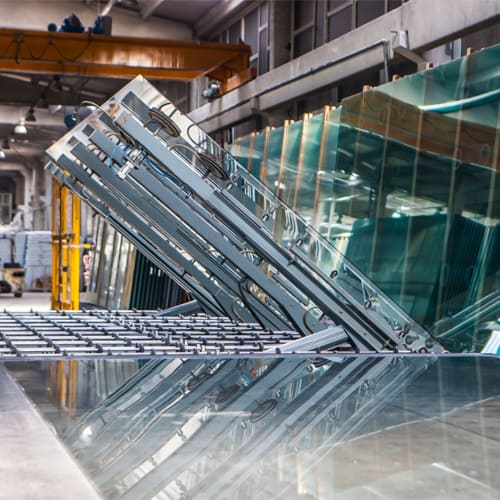 How is glass made?

All glass making begins by melting down raw materials into a liquid that can be formed into a wide variety of shapes. In the earliest days of glass making, molten glass was poured into molds. By the 1st century BCE, glass blowing had been discovered, enabling the production of glass products that would be easily identifiable by someone today.

In glass blowing the glass maker puts a blob of molten glass on the end of a hollow tube, which is then inflated with air. This process is very similar to how you’d blow a bubble with chewing gum – except the bubble of glass can be hardened into a usable glass bottle afterwards! This process is essentially unchanged since those early days of glass production, although today is mostly used for decorative purposes.

Window glass is made using a different manufacturing process where liquid glass is poured over a pool of molten tin. The liquid glass floats atop the liquid metal, giving this glass its common moniker: float glass.

This process enables the creation of large, flat, and consistent glass sheets. The glass floats atop the tin because it is less dense, much like how vinegar will float atop oil.

Unlike plastic, glass is easily recyclable and recycled glass does not suffer from any reduction in quality. Not only is recycled glass of a similar quality to glass made from raw materials, the process actually uses less energy than starting from scratch.

Some glass products like windshields and bulletproof glass are made out of laminated sheets of glass and plastic. The plastic layers provide strength and help ensure that the glass stays together even when struck.

Shedding a light on glass

Hopefully this has cleared up any confusion you may have had about what glass is made of. This material is clearly ideally suited for a variety of roles, providing clarity and strength where it matters most. Our ability to formulate and shape glass has come a long way over the millenia we’ve been using it, providing us with everything from shatterproof automotive glass to the architectural beauty of frameless showers.

← Important Things To Know About Quotes for Frameless Shower Doors